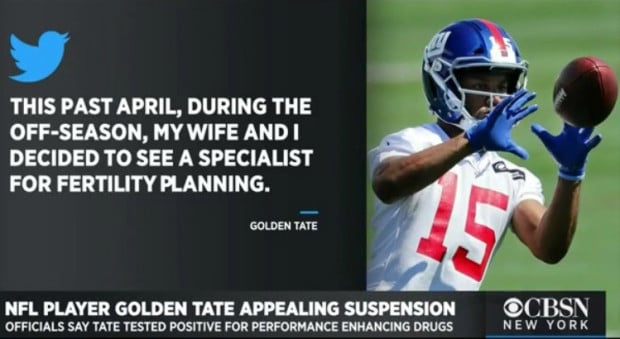 Tate, who racked up 611 receptions, more than 7,200 yards and 38 touchdowns during the first 10 years of his career, won’t be eligible to play in his first game with the Giants until Oct. 6 against visiting Minnesota.

He signed a four-year, $37.5 million contract, including $10 million guaranteed, back in March as part of the Giants’ plan to replace Odell Beckham Jr., who was traded to Cleveland. 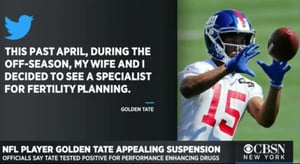 “This past April, during the offseason, my wife and I decided to see a specialist for fertility planning,” Tate wrote. “I started the treatment prescribed to me and just days later I discovered it contained an ingredient that is on the league’s banned substance list. I immediately discontinued use.”

Tate said he reported the situation to the NFL, and spoke to his coaches and general manager even before a failed test was confirmed.

But regardless, he’s facing a four-game ban. Giants fans have mixed reactions.

“He should be more careful about what he’s taking, putting in his body,” one fan said.

“If they’re taking fertility treatments, there should be some type of allowance if they’re trying to create a family. You shouldn’t be banned,” one fan said.

“I think the policy of the NFL is harsh, but at least it’s uniform for everybody, no nonsense,” another fan said.

“The medication that are used in fertility treatment to boost production as well as quality of sperm in men with infertility, they do have a component which is more or less a side affect, increases the production of testosterone, and testosterone could be considered a performance enhancer,” Kofinas said.

Kofinas did bring up an important discussion — that everyone should be able to pursue fertility treatment. The question here, though, is did Tate follow the right protocol?

Duddridge reached out to the Giants for comment, but didn’t immediately get a response. As of Monday, Tate is practicing with the team and plans to appeal the suspension.